from JAZZ.PT by António Branco 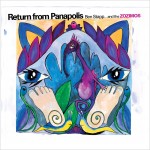 Even though the tuba was a key instrument in earlier jazz years, the shining of its presence became darker as decades passed, although musical formations have always counted on the unique nature of such a corpulent instrument to richen up their pallet of sound possibilities. Tuba player and composer, Ben Stapp is known among the more attentive Portuguese jazz fans for the fact that he resided in our country during 2005 to 2007. Despite his youth, it was clear for the jazz fans that they were facing someone whose obvious talents would allow him to travel towards other ambitious environments. Now living in NY and after an auspicious debut trio album (having as accomplices saxophonist Tony Malaby and multi-percussionist Satoshi Takeishi), Stapp returns with the Zozimos collective, a larger formation that has already crossed many different instrumental configurations and has presented various dimensions of Stapp’s music.

Zozimos was a gnostic mystical, alchemist born circa 300 a.C somewhere in the south of Egypt, in a place known in antiquity as Panapolis (today it’s called Akhmim). Stapp relates the alchemy with the maximization of each musical piece’s potential. Besides that, such alchemy also needed, according to the record booklet, an unknown element that one can find in medieval chemistry. Besides being a quoted instrumentalist, Stapp’s art achieves an even deeper relevance through the demanding and multi-resourceful compositional perspectives that he applies within his creations. Signing all the pieces as “Return to Panapolis”, written between 2008 to 2011, Stapp establishes a musical potion that has as essential ingredients; mathematical equations of his harmonic theory “Micro-tonal Tonality”, isorhythms, improvisation, rock based elements, electronics and…other harder to define components. The differences are evident when one compares this record with his debut album: the forms that he constructs are longer; there is a wider timbral diversity; there is also a stronger incorporation of the written material and more consistent harmonies. The featured pieces are fertile with details and they change in directions that positively surprise the listener, all the while granting an important space for improvisation. This skilled tension management between composed and improvised parts is, once more, one of the central characteristics of his approach. As an instrumentalist, Stapp either assumes the reins of the rhythmical pulsation or the central role in the harmonic and melodic development (listen to “Song of Elias”). The record opens up with a rock energy tune called “Little Creatures Attack”, that offers to the listener a distorted guitar and gaudy woodwinds. The buildings of architect Frank Ghery, inspired the rhythmical complexity of “Ghery, Indiana”. The new version of “Painted Sharks” (a piece which was included in the debut album) is modified with timbral luxuries from which emanate bright solos from Alex Terrier on the soprano saxophone and Andy Hunter on the trombone. Inside the enigmatic atmosphere of “Chia Visits the Moon” comes the assertive trumpet of David Smith. With a more formal structure, “Schultz the Painter” is based on a rhythmic motif inspired by Messiaen’s music, and here again is another successful performance by Terrier. Closing up, “Sincerely, Planet Mom” is the piece that steers away most from the common denominator of this record, acquiring almost folk-rock colors with the incorporation of the violin and voice. A diverse, vibrant record that seduces the listener with its multiple points of interest, accomplishing several different nuances after repeated plays.

Tweet
Pin It
This entry was posted in Uncategorized. Bookmark the permalink.