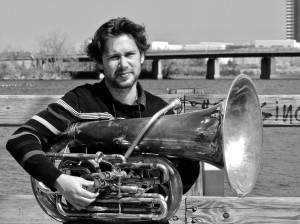 The music of composer and tubist Ben Stapp combines avant garde and traditional sounds with abstract narrative arriving at something truly his own. After a two year sojourn in Portugal, Stapp relocated to New York in 2007. He then released a trio recording that “[marked] the debut of a fresh new sound”(Troy Collins). Expanding his expressions with larger ensembles (the Zozimos) and sounds, he went on to write a two hour opera, Myrrha’s Red Book. This was performed at Roulette where he received his second commission there and became a Jerome Artist. The album was praised as “unlike anything reviewed in recent times”(Bruce Gallanter). “He has a daring that few artists possess”(Cisco Bradley). His recent release, Mind Creature Sound Dasein(FSR) features a wide range of expressive possibilities on tuba: “After the surprise comes the pleasure and the certainty that we are facing one of the most delicious records not only of the year, but of the last decade”(Rui Eduardo Paes).

His own groups, which feature Stapp’s compositions, include a trio record (2008) with Satoshi Takeishi and Tony Malaby called Ecstasis. All About Jazz said it was a ”debut of a fresh new Voice,” and a musician, “most certainly to watch.”

As a digital release and possibly hard to digest faux-pop, post-modern aesthetic, it received little press. Antonio Branco from JazzPt however took it on and said it was, “a diverse, vibrant record that seduces the listener with its multiple points of interest, accomplishing several different nuances after repeated plays.” The group and music were 1st place winners the 38th Annual Duke Ellington Jazz Festival – Bob Stewart Tuba Competition.

Later that year he was awarded his first large ensemble commission for a completely differently minded ensemble and composition, called 8 houses, which dived into the mysticism of the I-Ching and compositionally a piece using aleatorics, sub-groupings, free-improvisation, note cells, and electronics. It was really a concerto for the incredible duo, Vortex, Satoshi Takeishi and his wife Shoko Nagai. The piece is available on Stapp’s bandcamp page.

Further developing the Zozimos Ensemble, Mr. Stapp dedicated his efforts to an opera to consecrate his obsession with Jung and to enfold his most recent harmonic and rhythmic ideas into a detective narrative/ abstracted autobiography. After two years of workshopping music and narrative ideas he finally recorded a two album set entitled, Myrrha’s Red Book (2015) released by the now collapsed record label, Evolver. With this piece Stapp was one of the Jerome Foundation’s Emerging Artist Commissions. The full list for that year was: Ben Stapp, Aaron Burnett, David Ruder, Ha-Yang Kim, Leslie Flanigan, Tyshawn Sorey, Mary Kouyoumdjian and M.V.Carbon.

…one of the best discs of the week and unlike anything I’ve reviewed in recent times. Bruce Lee Gallanter, DMG

Myrrha’s Red Book, Act 1 by Ben Stapp & the Zozimos is a record bursting with compositional ideas that are matched by equally sophisticated musicianship. Stapp’s imagination is limitless, his influences truly diffuse, and he realizes his vision due to a type of daring that few artists possess. This record is certain to appear on a number of best of 2015 lists. — Cisco Bradley, Jazz Right Now

Mr. Stapp has recently recorded a duo album with Joe Morris with special guest Stephen Haynes released on Fundacja Sluchaj (2019). This album features more of the extended techniques of the instrument. Read an interview about the album here and its connection with Mr. Stapp’s sci-novel, Mind Creature Sound Dasein.